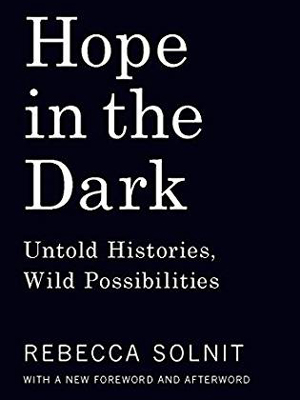 When the first edition of Hope in the Dark was published in mid-2004 it gained an instant cult audience. Many readers were so inspired by Solnit’s book that they bought multiple copies to give to friends. This new, significantly expanded edition covers, among other things, the political territory of America and the world after George Bush’s re-election.

Acclaimed author Rebecca Solnit draws on her life as a writer and activist, on the events of our moment, on our deepest past, to argue for hope?hope even in the dark. Solnit reminds us of how changed the world has been by the activism of the past five decades. Offering a dazzling account of some of the least expected of those changes, she proposes a vision of cause-and-effect relations that provides new grounds for political engagement in the present. Counting historic victories?from the fall of the Berlin wall to the Zapatista uprising to Seattle in 1999 to the worldwide marches against war in Iraq to Cancun in September 2003?she traces the rise of a sophisticated, supple, nonviolent new movement that unites all the diverse and fragmentary issues of the eighties and nineties in our new century.